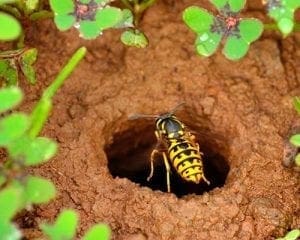 Paper Wasps build their nests on manmade structures such as eaves, open pipes or in bushes and trees.

The nest and surrounding areas are treated with an approved liquid spray. If the nest is accessible we will remove it. We also check the area for other nests.

European Wasps establish their nests in Canberra in the Spring. By late Autumn they can read up to 4000 wasps per nest, quickly becoming a dangerous hazard.

Insecticide is injected into the nest or hive to eradicate the pests. Residual insecticide takes care of any wasps returning to the hive.

They build their nests in well hidden holes in the ground, wall cavities and roofs. Their nests can be spotted by paying attention to their acitivty.

If nests are disturbed accidentally or otherwise people can be stung making them particularly dangerous for young children. Wasp stings are becoming increasingly common in Canberra.

The wasps are attracted to sweet drink and food, including pet food. Wasps, unlike Bees, have the ability to sting you more than once. 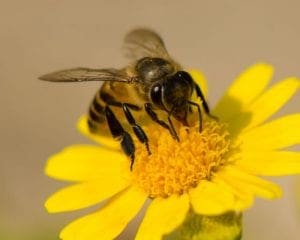 Feed pets inside and never attempt to remove a nest yourself.
You should consult a qualified, licensed pest control operator. Call Armageddon Pest Control.

Bees are endangered and are vitally important to our ecosystem. However, occasionally bees can create a hive in a wall cavity or somewhere that poses a risk to humans.

If you have a problem with bees in or near your home, contact Armageddon Pest Control. Often you will be referred to a Beekeeper for safe removal of the bees (safe for both humans and bees) as bees are beneficial for the environment.

They are safe for humans and pets.
Family friendly / Low toxicity